Future Binds: The kids are alright 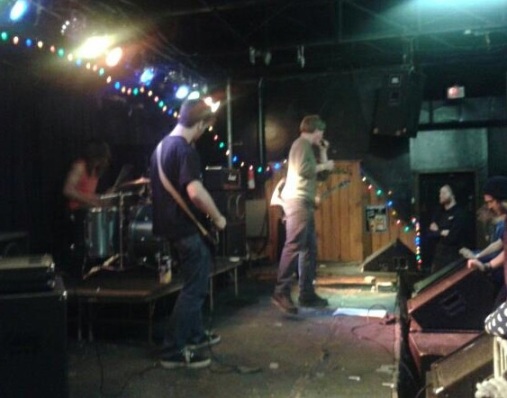 So my oldest son, Aaron, turns 18 years old today. Happy birthday, kid, even if you’re too old (and tall) for me to get away with calling you “kid” anymore. But please indulge your proud papa.

Aaron has been playing bass in rock bands for a couple of years now, a process I have watched with a mixture of pride, admiration and apprehension. I mean, he’s my son, so I’m going to think anything he does is pretty great. But I’ve watched so many bands crash and burn over the years, I can’t help worrying.

So even though I’m obviously not an impartial observer, I think Aaron’s latest band is fantastic. They’re called Future Binds, consisting of three-quarters of his former band, Pure Scum; same lineup, except for the guitar player. The picture at right is from the first Future Binds show, which happened back in January at the Berkeley Cafe in Raleigh (yes, the same Berkeley Cafe that figures into the “Losering” preface, as the first place I interviewed Ryan Adams).

I don’t go to every Future Binds show because I don’t want to cramp anybody’s style, plus it can get weird having the music critic from the local paper showing up all the time (not to mention the fact that I’m too old and brittle to participate in the moshpit). But I’ve been to a few of their shows, and they play loud, fast and very brief punk rock; I don’t think I’ve seen a Future Binds or Pure Scum show last longer than about 10 minutes.

Since that Berkeley Cafe debut, Future Binds have gone on the road a few times, including a recent spring-break weekend jaunt up to Richmond and D.C. Aaron has learned plenty about just how little money there is to be made in music; I’ll never forget the text he sent after finding a $10 bill on the street in Asheville, which excited him because it meant he’d be returning home “with more money than I left with!” That counts as a win, for sure.

Meanwhile, Future Binds have also done their first demo recordings, which are available for free download here. The five songs clock in at less than seven minutes, so this won’t take up too much of your time. But it’s quite good, especially the last song, “One Less.” Always nice to have a hook, even in one’s hardcore.

For obvious reasons, I can’t write about Future Binds in the newspaper. But it’s mighty nice to be able to do so here.

One thought on “Future Binds: The kids are alright”