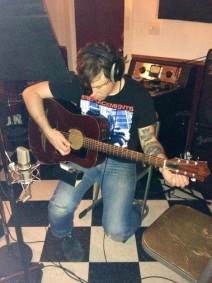 There’s still no word on when Ryan Adams’ 2000 Heartbreaker album (which has been out of print and officially unavailable since March 1) might be re-released in some fashion. But a promising totem of that era is going around the web today, a photo of Ryan with the Guild guitar he played on Heartbreaker — and looking very much like he might be in the midst of recording…something. Maybe that new record that’s been discussed, which may or may not be coming in October. Here’s hoping!