A fan’s plea to Ryan Adams: Come home for supper

So as we’ve covered repeatedly (most recently in Rolling Stone), Ryan Adams don’t come around here no more — “here” being his native state of North Carolina. It’s hard to say why. As I wrote in the “Losering” preface, he is remembered more fondly in his old hometown of Raleigh than he may realize; but I guess that fondness is not two-way, whatever the reason.

In any event, Ryan seems to go to some lengths to avoid playing shows in North Carolina these days, even when he’s in the vicinity. His upcoming late-spring Southeastern tour, for example, will find Ryan playing in Tennessee, Kentucky, Virginia, South Carolina and later Georgia — surrounding The Old North State without playing there. His tour mate Jenny Lewis is scheduled to peel off from Ryan’s tour for a night and play Saxapahaw’s Haw River Ballroom on May 4, but Ryan is not on the bill.

Still, hope springs eternal. And here we have a grassroots campaign by Raleigh superfan Tony Sicilia to lure Ryan back home via the Tweet below, with a dinner invitation. Come on, Ryan, how can you refuse an offer of home-cooking? 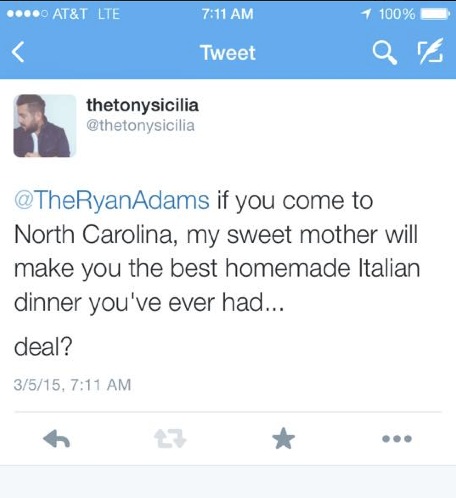 8 thoughts on “A fan’s plea to Ryan Adams: Come home for supper”