The Velvet Cloak checks out? 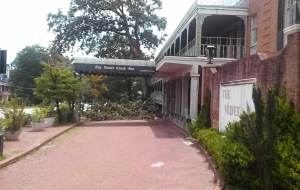 One of the most recognizable “Old Raleigh” spots along the mid-1990s Whiskeytown era’s Hillsborough Street strip is in a sad state of disrepair, and getting sadder. This is the scene right now in the front driveway of  the vacant  Velvet Cloak Inn — which is currently blocked by one of the most gigantic tree branches I’ve ever seen that’s not an actual entire tree. Seriously, these pictures don’t accurately convey just how huge it is.

We’ve had some pretty big storms here in Raleigh the past few days, and I guess one of them took this branch down (with a fearsome amount of noise, no doubt). The place was completely deserted when I was driving by and stopped to snap these pictures a little while ago. And since every door and gate appeared to be chained shut, nobody seems to be in too much of a hurry to take it away. So it’s probably going to stay there a while.

The Velvet Cloak and its distinctive New Orleans-style wrought-iron dates back to the 1930s, and it stands just a few blocks west of the soon-to-be-demolished IHOP. It used to be a pretty swank place to stay in West Raleigh; Whiskeytown’s old tour manager Thomas O’Keefe says Ryan Adams used to board there when he was “between couches” in the late ’90s. But the Velvet Cloak fell on hard times after becoming a residence hotel about a decade ago. Recently, a developer bought the property with plans to demolish the inn and turn it into student housing — the same fate that befell the Brewery.

Looks like another venerable Raleigh landmark will bite the dust before too long. 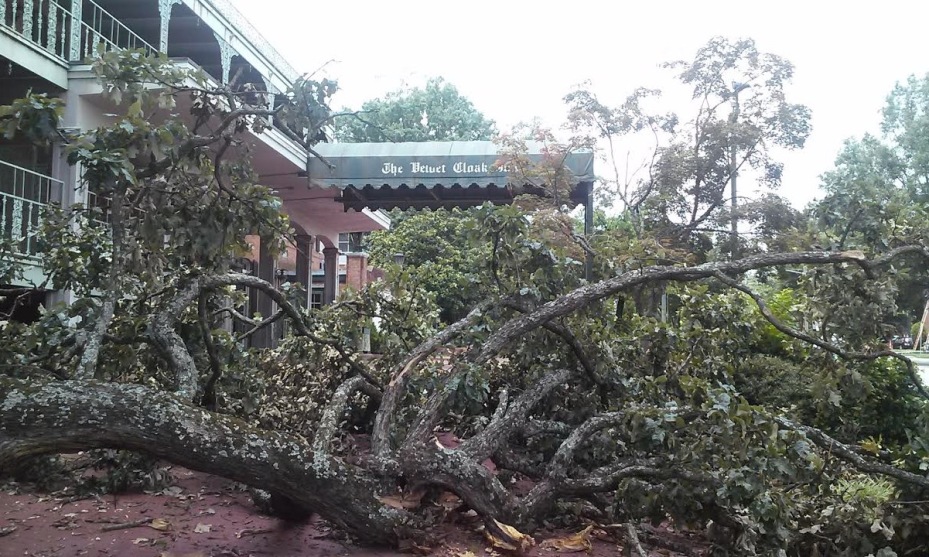 5 thoughts on “The Velvet Cloak checks out?”