Losering 3: Somebody Remembers the Rose

While I wouldn’t exactly call it a headphones record, I’ve always considered Whiskeytown’s 1997 magnum opus Strangers Almanac to be more of a private home-listening experience than a live-performance artifact. It’s a truly brilliant album and one of my favorites, but it also has enough radical shifts in tempo, tone, mood and instrumentation to seem truly daunting to pull off onstage.

Nevertheless, I’m here to tell you that Raleigh’s Antique Hearts absolutely nailed it Friday night at our third “Losering” tribute show at Deep South The Bar. Playing the album start to finish and in order, they pulled off everything with an aplomb that left me awestruck, even the album-closing “Not Home Anymore” (which frontman Zach Gregory jokingly called “a studio song”). I cannot imagine how much work it took to get to this level; everyone involved did the material and themselves proud.

So did the opening acts, who both played some non-Strangers Ryan Adams songs. Shane Smith went deep into the catalog with “Wish You Were” from 2003’s unjustly maligned Rock n Roll, and also worked in Ryan’s arrangement of the Taylor Swift 1989 song “Shake It Off.” Ryan Kennemur went deeper still (assisted by Stacy Chandler in the role of vocal/fiddle foil) into the way-back Whiskeytown catalog with “Desperate Ain’t Lonely” and even “Lo Fi Tennessee Mountain Angel.”

All in all, it was another lovely evening, and it raised $724 for the Food Bank of Central and Eastern North Carolina. I expect we’ll do this again next year on or about the same date, July 29, for the 20-year anniversary of Strangers Almanac. Thanks to Dave Rose, John Booker and the rest of the Deep South staff for making it happen — and to Antique Hearts, who put a massive amount of work into getting this right and did it brilliantly. 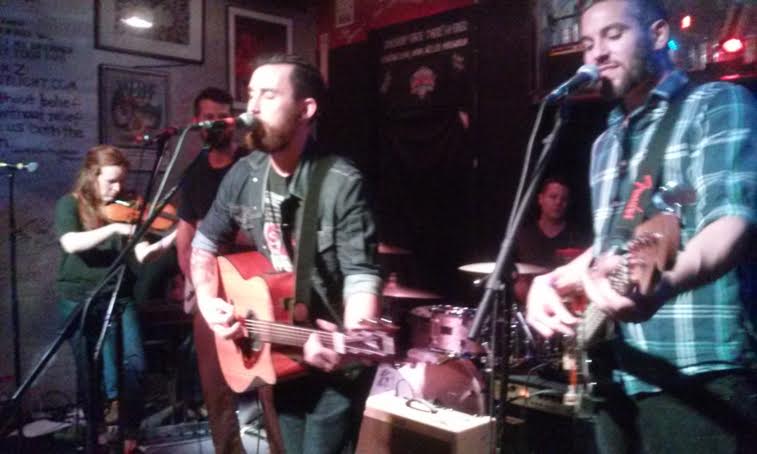 Shane Smith
“Firecracker”
“Wish You Were Here”
“Touch, Feel & Lose”
“My Winding Wheel”/”Shake It Off”
“To Be Young (Is To Be Sad, Is To Be High”

Antique Hearts, Strangers Almanac
“Inn Town”
“Excuse Me While I Break My Own Heart Tonight”
“Yesterday’s News”
“16 Days”
“Everything I Do”
“Houses on the Hill”
“Turn Around”
“Dancing With the Women at the Bar”
“Waiting to Derail”
“Avenues”
“Losering”
“Somebody Remembers the Rose”
“Not Home Anymore”
Encore: “Drank Like a River”

2 thoughts on “Losering 3: Somebody Remembers the Rose”