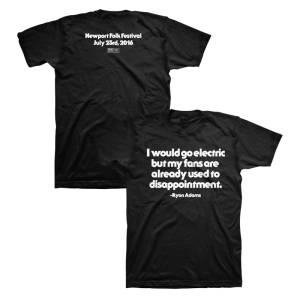 Ryan Adams recently played a well-received acoustic bluegrass set with Infamous Stringdusters at last month’s Newport Folk Festival, long-ago site of one of the the rock era’s great confrontations. Newport was where Bob Dylan horrified and enraged folkie purists back in 1965 by putting aside his acoustic guitar to play loud electric-guitar rock backed up by the Butterfield Blues Band. Rock-mythology enthusiast that he is, Ryan made a nod to that history as well as his own penchant for confounding the expectations of his fanbase with the for-the-occasion T-shirts he was selling at the gig:

I would go electric but my fans are already used to disappointment.

The shirts are now available for $19.99 at his online Pax Am store. I’ve gotta say, I like this almost as much as my vintage Ryan Adams Is On Fire T-shirt. And along these lines, there’s a Bob Mould song I’d like to hear Ryan cover.