Postcards from the edge

There’s a scene in the Oscar-winning movie “Spotlight” that almost made me gasp when I saw it — the one where a couple of Boston Globe reporters go rifling through a stack of directories in the paper’s basement. But that reaction was less about the events than the setting. Like most newspapers, the News & Observer has a messy room just like that down in the basement, and it looked so familiar I’d swear they filmed that scene right here in Raleigh.

A wide swath of my personal archive, such as it is, is stashed in the N&O’s basement morgue in a half-dozen big boxes overflowing with old cassette tapes, records, compact discs, press releases, photos and various odds and ends. Today, I had occasion to go rooting around there in search of something, when I came across an old Whiskeytown promotional artifact I’d forgotten I had — the postcard below showing “The Route to Whiskeytown,”  which the band’s record label was sending out to journalists in advance of 1997’s Strangers Almanac album (along with, ahem, bottles of whiskey). That year was a heady time for Ryan Adams as well as local music in general; check chapter 7 of “Losering” for more about that.

Contemplating this postcard two decades on, it’s interesting to contemplate the reference-point buttons that Outpost Records hoped to push: from Gram Parsons and Tom Petty down South to the Replacements up North and Camper Van Beethoven (?) out West, with the Meat Puppets in between. Meat Puppets, where the heck did that comparison come from?

Anyway, this postcard is something I had tacked up on my bulletin board for more than a decade before it got boxed up and sent downstairs to the basement seven years ago, when I had to move to a less-spacious corner of the N&O newsroom. I think I’ll find another place to put it up again. 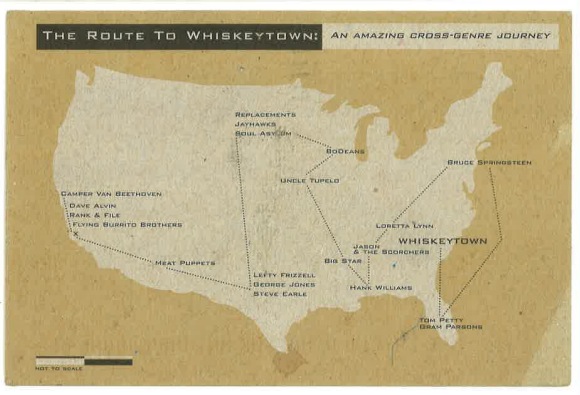