Saturday marked 20 years to the day since Whiskeytown’s epochal Strangers Almanac album made its debut, so we marked the occasion with “Losering 4” — the latest installment of Ryan Adams tribute shows that happen here in Raleigh on a semi-annual basis. And it was another wonderful night with some fantastic performances.

Bobby Bryson (returning from the first “Losering” show back in 2013) got things rolling with a “Come Pick Me Up” singalong. Ryan Kennemur, the one performer to have played all four of these “Losering” shows, gave me a lump in the throat with “Jacksonville Skyline.” Garland Mason’s rendition of “Be My Winding Wheel” kept that going. Christiane and Eric Scholz were two of the best voices I’ve heard in recent memory, and they also showed great deep-cut attention to detail; Christiane’s take on “Enemy Fire” was nothing short of astonishing. Johnny Folsom 4’s David Burney put a Man-in-Black spin on “When the Rope Gets Tight (Don’t Fail Me Now).” And Antique Hearts and friends closed out the night with another spectacular start-to-finish rendition of Strangers Almanac, all 13 songs.

All that, and the show drew a very nice turnout that raised $750 for the Food Bank of Eastern and Central NC. Grateful appreciation and all credit to the musicians who played; and to Dave Rose, John Booker and the rest of the Deep South crew for making it happen. Once again: Thank you, friends.

Garland Mason
“Be My Winding Wheel”
“Oh My God, Whatever, Etc.”
“Oh My Sweet Carolina”

Antique Hearts, Strangers Almanac
“Inn Town”
“Excuse Me While I Break My Own Heart Tonight”
“Yesterday’s News”
“16 Days”
“Everything I Do”
“Houses on the Hill”
“Turn Around”
“Dancing With the Women at the Bar”
“Waiting to Derail”
“Avenues”
“Losering” (prefaced by a verse of Bryan Adams’ “Summer of ’69”)
“Somebody Remembers the Rose”
“Not Home Anymore”
Encore: “Drank Like a River” 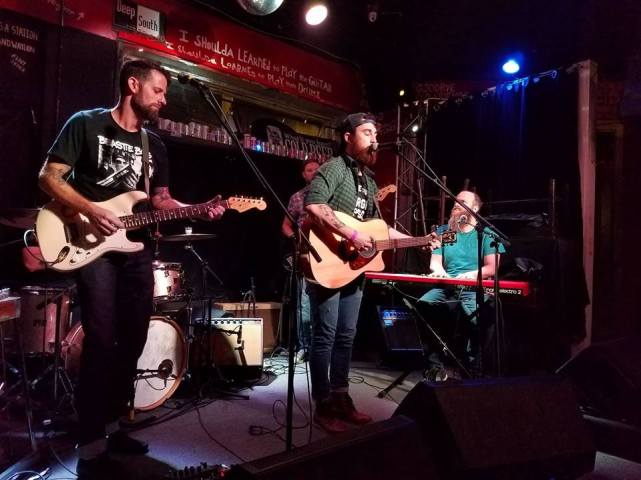 Come Dancing (with the women at the bar)

The first time I heard Rachel Hirsh perform her spooky version of Whiskeytown’s “Dancing With the Women at the Bar” was just over two years ago, at 2015’s “Losering 2: A Tribute to the Songs of Ryan Adams” show. It really was fantastic and I said as much at the time, writing that I thought it was something “she really should record.” I wasn’t the only one who thought so, and I’m happy to report that Rachel has indeed recorded a very fine version with her band Bruxes  — which is now out in the world; you can take a listen on Spotify, and buy it on Amazon.

The original version of “Dancing,” of course, first appeared on Strangers Almanac, Whiskeytown’s alternative-country landmark, which was released on July 29, 1997. That makes this Saturday the album’s 20-year anniversary, and we’re going to mark the occasion in style. That night, Raleigh’s Deep South The Bar will host “Losering 4,” with Antique Hearts playing Strangers Almanac from start to finish — which they pulled off with amazing aplomb last year, so it should be great. David Burney, Christiane, Eric Scholz, Garland Mason, Bobby Bryson and Ryan Kennemur are all on the bill, too, and yours truly will be there to serve as host.

Tickets are $7-$10, with proceeds again earmarked for the Food Bank of Eastern and Central NC. Come on out.

Next month will make (gulp) 20 long years since Whiskeytown released its 1997 alternative-country landmark Strangers Almanac, and we’ll be marking the anniversary in style with another “Losering”-themed tribute show. Scheduled for July 29 — which was indeed the  release date for Strangers back in 1997 — “Losering 4” will feature Antique Hearts in a reprise of last year’s “Losering 3” show, when they played Strangers from start to finish with stunning precision.

Also on the bill will be David Burney, Christiane, Eric Scholz, Garland Mason, Bobby Bryson and Ryan Kennemur, all playing other songs from Ryan’s catalog over the years. If I may be so bold as to make a request, I’m hoping for a song or two from this year’s Prisoner.

I’ll be there to serve as host, of course, and the proceeds will benefit the Food Bank of Central and Eastern NC. So pencil in July 29 for Deep South the Bar, and get tickets here.