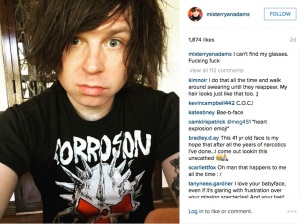 Ryan Adams may not play in his native state of North Carolina anymore (as we’ve covered), but he definitely remembers and represents where he came from. For example, there’s this Instagram photo he posted a few days ago, in which he’s wearing a T-shirt bearing the classic spiked-skull logo for Raleigh hardcore legends Corrosion of Conformity.

COC has been around since the early 1980s, becoming enough of a thrash-metal trademark to inspire a 2010 “Saturday Night Live” sketch starring a middleaged band called “Crisis of Conformity.” They were one of the main reasons that Ryan’s Patty Duke Syndrome bandmate Brian Walsby was inspired to move to Raleigh in the mid-’80s and still pretty much ruled the town at the time Ryan himself arrived from Jacksonville in the early ’90s. And COC is still at it all these years later, with a tour opening for Lamb of God on this year’s schedule.

Despite never having anything like a mainstream “hit,” COC stands as a great example of how staying power is what really counts over the long haul. The band’s best-selling album, Deliverance, peaked at just No. 155 on the Billboard 200 album-sales chart after it was released in the fall of 1994. And yet Deliverance has never stopped selling, to the point that it’s very close to reaching a very significant milestone.

I recently checked in on Deliverance‘s U.S. sales figures via Nielsen Soundscan, and it now stands at 499,000 copies — within just 1,000 copies of earning a gold record for half-a-million copies sold. So sometime in 2016, it should become official.

Somehow, COC earning a gold record before Ryan seems right and just. I expect Ryan himself would agree.