As noted earlier, Ryan Adams is playing a whole bunch of festivals this year, and they’re gigs that come with a certain amount of built-in potential irritants. Sound bleed from one stage to another, for instance. Saturday night at New York’s Governors Ball found Ryan reportedly getting in touch with his inner Mark Kozelek while trying to be heard over electronic dance music star deadmau5 (Joel Thomas Zimmerman), who was playing another stage nearby.

Ryan and deadmau5 have recorded together before (although nothing was ever released). But that didn’t stop Ryan from talking a little get-off-my-lawn-type smack onstage: “Try and make this song on your fucking iPhone. This song is not going to match the robot music over there. It’s like we’re living in a ‘Terminator’ nightmare.” Then he played “Oh My Sweet Carolina.”

The initial response from deadmau5 via Twitter is below. He also went on to call Ryan “a cool dude…talented musician, had a jam sesh with em once. Which is why I find this odd,” and to poke fun at some of the headlines about the incident: “OH ONES! another rocker vs. Electronic music feud! This is all JUST SO FUCKIN NEW! At least his music is original.”

UPDATE (5 p.m.): At the bottom, a peace-making Twitter exchange between Ryan and deadmau5 restores civility and brings it to a close.

Ryan: No disrespect meant. My humor is 100% sarcasm (as you know). Peace & love. Build that dream machine!…I wrote that last tweet to @deadmau5 on my I phone. Same one I used to take voice notes for my last and new record.

Ryan Adams gets in touch with his inner festivarian

Even though Ryan Adams hasn’t set the charts on fire since its top-5 debut last September, the album has led to a very busy stretch of high-profile touring for its maker. After playing Newport Folk Festival and Hardly Strictly Bluegrass the second half of last year, Ryan is showing up on the schedules for most of 2015’s big U.S. festivals, a run that will put him at April’s Coachella Festival for the first time ever (and it’s hard to fathom how he’s never played there until this year).

In fact, Ryan figures very prominently in Spin’s new Venn Diagram of the Overlap Between the Coachella, Bonnaroo, and Governors Ball Lineups. As you can see below, he’s positioned just below Drake in the group of artists playing two out of the three, Governors Ball and Coachella. No Bonnaroo, at least not yet; but if you were to add this spring’s New Orleans Jazz & Heritage Festival, the Shaky Knees Music Festival in Atlanta and Big Guava Music Festival in Tampa, Fla., that would put him in five out of six.

Given how seldom Ryan plays his former North Carolina stomping grounds nowadays (as in, never — it’s been nearly a decade since his last show in his long-ago hometown of Raleigh), Shaky Knees in Atlanta in May just might be as close as he gets to The Old North State this year. Could a road trip be in order?… 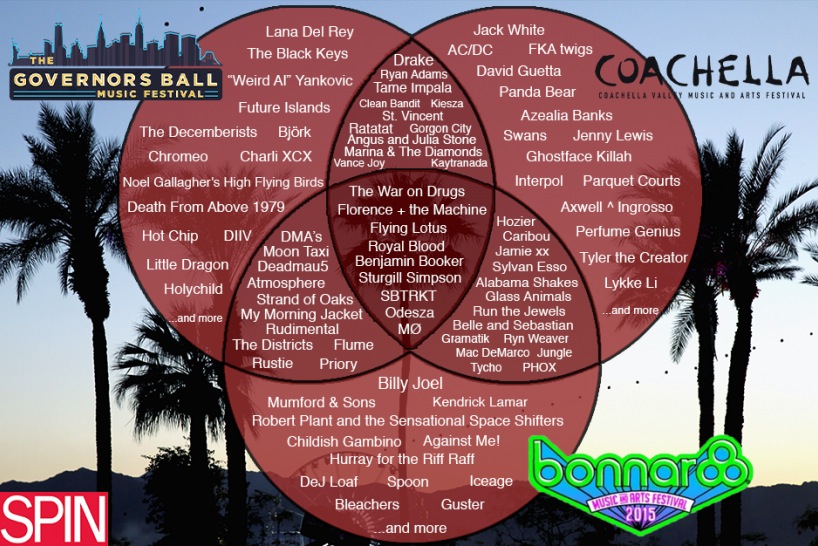 ADDENDA: Turned out those five festivals weren’t even the half of it. In 2015, Ryan also wound up on the bill for Sasquatch Music Festival at The Gorge in Quincy, Wash.; the Fuji Rock Festival in Japan; Roskilde in Denmark; Splendour in the Grass in Australia; Nieuwe Bevestigingen in Holland; Calling Festival and Glastonbury in England; and Governor’s Ball in New York.

Also, here is his complete Glastonbury set from June 28.