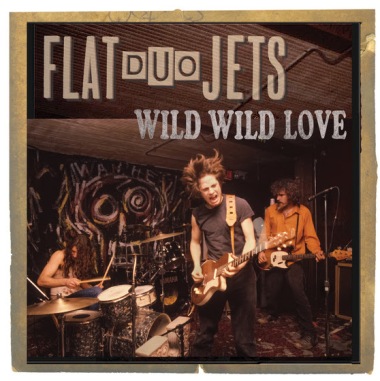 Before I moved to North Carolina in 1991, there were only a few local bands I knew much about. But one I had already come to know and love was Flat Duo Jets, the guitar-and-drums duo of Dexter Romweber and Chris “Crow” Smith. I’d caught the Jets on tour the previous year in Denver, opening for The Cramps, and their space-age bossa-nova rockabilly still stands as one of the most amazing spectacles I’ve ever witnessed. It also turned out that the News & Observer editor who hired me for the paper’s rock-writer job just happened to be married to Dexter’s manager, which was something else I considered a major selling point.

Once I got here, I became even more of a Flat Duo Jets acolyte, writing about them every chance I could in the paper as well as magazines including No Depression and Spin. And when I wrote my novel “Off The Record,” I modeled the unhinged rock-star protagonist as a mixture of Dexter and Ryan Adams.

All of which has led up to my latest and possibly most ambitious non-fictional spiel about the Jets to date, as part of a new reissue being released this week — Wild Wild Love (Daniel 13), an honest-to-God vinyl box set centered on their 1990 full-length debut album Flat Duo Jets. Along with abundant outtakes and rare tracks, the package includes a beautifully illustrated 40-page booklet featuring vintage photos and three essays, one of them a scene-setting band history by me that weighs in at more than 9,000 words. The other two essays are by Flat Duo Jets producer Mark Bingham; and Josh Grier, who produced the Jets’ 1984 cassette-only EP (In Stereo), which will be on vinyl for the first time in this box set.

Take your beer to Whiskeytown 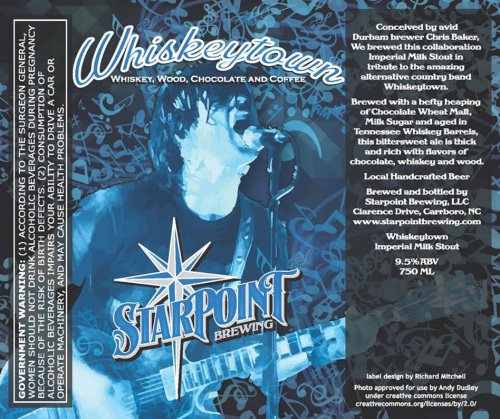 Just in time for the holidays, here’s another super-cool Whiskeytown token that might be even rarer than the old Strangers Almanac whiskey bottles — Whiskeytown Beer, the entire 120-bottle run of which might already be sold out by the time you read this. It’s the work of Chapel Hill’s Starpoint Brewing, brewed by Tim Harper and Chris Baker. And if the name Tim Harper rings a bell, it should.

Long before he ever started brewing beer, Tim was an old studio hand in North Carolina for a couple of decades. Whiskeytown figures prominently on his resume. Tim engineered and Chris Stamey produced the 1996 “Baseball Park Sessions”  that got Whiskeytown its deal with Outpost Records, and those two also oversaw the remix of Whiskeytown’s Faithless Street album that was reissued in 1998.

The road to Whiskeytown Beer started a few months back when Baker come up with a beer recipe involving whiskey, wood, chocolate and coffee, and enlisted Harper to brew it at at his brewery. First came the beer, then came the name.

“Nobody could come up with one,” said Tim. “I’d already started naming beers for bands I’ve worked with over the years, like a ’74-’75 Oktoberfest for the Connells. Sooner or later, I’ll do a Let’s Active beer. Stamey-Holsapple, I don’t know how I’ll work that out. But anyway, ‘Whiskeytown’ came to me in a flash one night for this one because of the whiskey barrels. We used Jack Daniels barrels to brew it.”

Before printing up the label, Tim got approval from multiple sources in Whiskeytown’s orbit, including the photographer who took the picture of Ryan (also seen on Whiskeytown’s Wikipedia entry), Caitlin Cary, Skillet Gilmore, lawyer Josh Grier — and yes, Ryan himself.

“What Ryan said was, ‘Tim, that sounds awesome,'” Tim said with a laugh. “And we found the photographer, got his approval, too. Caitlin and Skillet and Josh, even though Josh informed me that Whiskeytown did not have a trademark for food and beverage. So I didn’t even have to ask him, but I thought it’d be rude if I didn’t. Anyway, I asked everybody and they all said yes.”

Once he was done brewing, Tim bottled 10 cases to sell and put the rest into draft kegs. Those 120 bottles are going fast, but fear not: More is on the way.

“I’m working on a new batch,” Tim says. “It should be available in a couple of months, late February or early March.”

I was apprehensive about attempting a biography of Ryan for a number of reasons, one being that my opinions about his career fall well outside the mainstream narrative. That was why I’d never bothered with trying to sell a book about Ryan to the big New York publishing houses. Such a pitch would have boiled down to something like this:

Yeah, the Ryan Adams record that everybody seems to know and love — “Gold,” the album that broke him through to the masses, got the Grammy nominations, cemented his “Almost Famous” career arc and already inspired one not-so-great book about him — actually isn’t very good. In fact, that might be the least-interesting record he’s ever done. Everybody needs to go back and listen instead to the obscure records he was doing with Whiskeytown, which are far, far more compelling…

I didn’t want to be “That Guy,” the one whining about how a favorite artist was so much better before the proletariat caught on. Besides, coming from an unknown writer in Mayberry, that wasn’t going to fly. I’d already had one frustrating go-round with the book world over “Off The Record,” a novel I’d written and set in the music industry, centered around a crazy brilliant rock star whose fictional flamboyance was very much like Ryan’s.

“Rock novels are a tough sell” — I heard that over and over from agents and publishers, many of whom said nice things about “Off The Record,” and all of whom passed on it. Rather than leave it in the drawer, I eventually decided to put it out myself and it did okay. I sold enough books to break even, and Greil Marcus was kind enough to put it at No. 6 on his “Real Life Top 10” one week (an indescribably huge thrill, since he’s always been an idol of mine; I don’t think I slept for a week). But after the book industry’s response to “Off The Record,” I wasn’t in a hurry to put much effort into pitching another book that didn’t comfortably fit the standard pigeonholes.

Then, suddenly, someone did want me to write that Ryan book. My bluff was called, forcing me to confront my biggest cause for apprehension of all: I was pretty sure Ryan wouldn’t cooperate. I’d tried to interview him repeatedly during his post-Whiskeytown years; the answer had always been nyet, and no one would ever come out and say why. He and I had a break, but I didn’t know what it was over. Still don’t. I did hear mixed reports over a 2000 No Depression magazine feature I’d written, and I’d also written an unenthusiastic review of “Gold” when it came out. But neither of those seemed like enough to put us on the outs. It seemed like others had done worse without earning the cold shoulder.

The closest I ever got to an explanation was a 2002 phone call from his then-manager, who called me in an agitated state to basically tell me that “some people were saying some things.” He wouldn’t specify who or what, only that he and Ryan were disgruntled because I’d done…something. One thing he did specify was a Magnet magazine profile the previous fall, which painted Ryan in a less-than-flattering light. I was quoted in the story and I’d also given the writer some phone numbers to find other people he interviewed, which the manager seemed to believe represented a breach of ethics. I was confused and couldn’t understand why everyone was so upset, so I asked if I could talk to Ryan directly about it.

“I don’t think that would be such a good idea,” the manager said, laughing mirthlessly.

I didn’t get to talk to Ryan then, or ever. Ryan doesn’t seem to play in Raleigh anymore — except for a show in 2005, he hasn’t played his old hometown since 2000 — so I’ve periodically tried to get interviews for pieces I’ve written about some of his records. Nope. Naively, I hoped that enough time had gone by for this book to be different. Ha. Ha. Ha.

Part of my procrastinational busy work during 2010 involved sending backdoor messages to Ryan via mutual friends who were still in touch with him. That went nowhere. Finally, in December when it was coming on Christmas, it was time for the direct approach. I screwed up my courage and e-mailed Ryan’s manager. John Silva, a heavy hitter whose other clients include Beastie Boys, Foo Fighters, Sonic Youth and Beck. I made it as neutral and straightforward as possible:

Mr. Silva — I wanted to get in touch about a project concerning Ryan Adams, which I hope he’ll be willing to participate in. University of Texas Press is starting up a “No Depression Biography Series,” and Ryan is to be one of the artists profiled. It has fallen to me to do the book. Below is some information about the series from the UT Press catalog.
Ryan and I have a long history going back to his days in Raleigh with Whiskeytown, although we’ve not spoken in years beyond a cordial e-mail exchange a few Christmases ago. But I’ve always been an admirer, from back in the day (http://archives.nodepression.com/1995/09/a-short-interviews-journey-into-hell/) up to the present (www.spin.com/reviews/ryan-adams-and-cardinals-iiiiv-pax-am).
My hope is that he’ll agree to be interviewed. The book will come out on a university press, so the focus is to be very much on the music. Beyond a bit of interview access over the next six months, this is a process that should demand very little of him.
Happy holidays and please do holler back,

That letter went unanswered, as did several followups. So I turned to someone I knew I could at least get on the phone, Josh Grier, Ryan’s lawyer and someone I’ve known for 20 years. Josh has some history in North Carolina, having studied at Duke University Law School before going on to run Dolphin Records in the 1980s. His client list is as impressive as John Silva’s, and he’s worked with a lot of North Carolina acts over the years. I was hoping for some help here. But when I asked him about Ryan being interviewed for the book, it was the same answer as always.

“I know about this, I’ve heard talk,” Josh said. “Ryan’s not going to participate.”

Why not? I asked

“He just doesn’t want to revisit that time,” Josh said, adding that Ryan’s memories of his time in Raleigh had grown “fuzzy.” And that was that. Josh and I talked for a while that day, the way we always did about bands and the music business and projects he was working on. But it was clear that interviewing Ryan to get his modern-day perspective on the past was not going to happen.

(ADDENDUM, 9/27/12: I have been told by a friend of Josh Grier’s that Josh remembers this conversation a bit differently. His memory of it is that he used the word “faded” rather than “fuzzy” in describing Ryan’s memories. I’m not sure that makes a huge difference, but said friend seemed to think it was important. Anyway…so noted.)

By the time I hung up the phone, I was overcome with depression and dread. That was the early spring of 2011, and I’d accomplished little beyond some interviews with secondary characters. My Sept. 1 deadline loomed not much more than six months off, and I had to write a 50,000-word manuscript about someone I hadn’t interviewed in more than a decade. New interviews with Ryan could have simplified the process by suggesting possible structures for the story; a framework, a roadmap of where to go. But I wasn’t going to get any of that from him.

Truly, I was on my own this time.