Posts Tagged With: Losering 2: A Tribute to the Songs of Ryan Adams

What Ryan Adams was doing this weekend: Coachella

So while Ryan Adams’ old hometown fans (including yours truly) were paying tribute to his music at Saturday night’s “Losering 2” show in Raleigh, Ryan himself was in California at the Coachella Festival for the first time ever — part of an impressive festival run he’s playing this year. Ryan played on Sunday night; and if you didn’t tune in the live-stream, video of his performance is at the bottom of this page and an archive audio recording is here.

While you’re listening, you can read some reviews (not all positive) here, here and here. Perhaps you’ll be moved to respond as the woman below did.

Categories: Uncategorized | Tags: Coachella, Losering 2: A Tribute to the Songs of Ryan Adams | Leave a comment 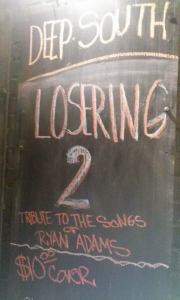 The first “Losering” tribute show back in 2013 went so great, I had a hard time imagining a sequel could come anywhere close to matching it. But Saturday night’s “Losering 2: A tribute to the Songs of Ryan Adams” at Deep South the Bar was truly start-to-finish wonderful in every way. It raised $923.46 for the Food Bank of Eastern & Central North Carolina, and the music was so moving that I found myself misting up a good half-dozen times over the course of the evening.

Mark Cimerro started things off with two early-period Whiskeytown songs, which was fitting. Mark used to be proprietor of Sonic Wave, the Raleigh studio where Whiskeytown recorded the tracks that became the 1995 “Angels Are Messengers From God” EP (and later the 1997 album Rural Free Delivery). “Too Drunk to Dream,” featuring pedal steel by Dylan Ritter from Greensboro’s The Grand Ole Uproar, was particularly fine; and for a between-song bonus, Mark recounted how Ryan had taken all the pictures off the walls at Sonic Wave during the Whiskeytown sessions because he found the studio environs “too nice.” Oh, that Ryan.

Rachel Hirsh destroying “Dancing With the Women at the Bar” — in the best way possible.

I got to host and introduce the bands, but there’s no way this show would have happened without the efforts of various members of I Was Totally Destroying It. Frontman John Booker booked the acts, helped stage-manage and performed himself; his version of “Somebody Remembers the Rose” was my first lump-in-the-throat moment of the night. IWTDI guitarist Curtis Armstead also ran sound and played (leading a nice “Come Pick Me Up” sing-along), and Rachel Hirsh’s version of “Dancing With the Women at the Bar” was a revelation that she really should record.

Also working hard was Aslan Freeman, who played his own set (props for “Turn Around,” especially) and backed up enough of the bill that he was onstage for a good chunk of the night. One person he played with was Kasey Tyndall, a young singer with a preternaturally big voice for a 19-year-old. She’s moving to Nashville soon and I expect you’ll be hearing a lot more from her before too long.

Other highlights: Ryan “Showtime” Kennemur and Taylor Adams from Dragmatic pretty much killing with “Excuse Me While I Break My Own Heart Tonight”; Keef Debonzo’s “Lucky Now,” another mist-up moment for me; Charles Marshall and Mike Ferguson from Balsa Gliders recreating “(Argument with David Rawlings concerning Morissey),” the spoken-word bit that opens Ryan’s Heartbreaker album; and the jaw-dropping voice of New Reveille’s Amy Kann. I tried shooting video of Amy singing “Easy Hearts” and the audio didn’t come out well enough to post; but check out New Reveille’s video here.

As I’ve mentioned before, I’m not usually onstage myself and if you were to ever hear me sing in public — which, to adopt the parlance of Taylor Swift, is so not going to happen, like, ever — you’d agree that’s a big, big net positive for the planet. But about halfway through the evening, Deep South co-owner Dave Rose called me from my side-stage MC perch to the center of the stage, to receive the plaque below. I had no idea that was coming, and I can’t tell you how touching it was. I’d already felt honored and humbled by the whole thing, and that put a nice capper on an amazing night. If you were there, you know. If you weren’t, well, you should’ve been.

All I can say is: Thank you, friends. 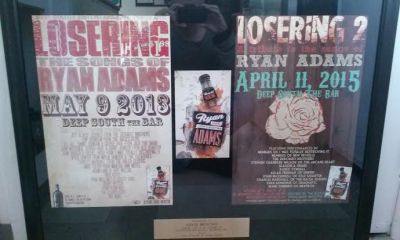 John Booker (I Was Totally Destroying It): “Somebody Remembers the Rose,” “Feels Like Fire,” “Two,” “When the Stars Go Blue”

Ryan Kennemur and Taylor Adams (Dragmatic): “Excuse Me While I Break My Own Heart Tonight,” “Drank Like a River,” “Houses on the Hill”

Aslan Freeman (Future Ghosts): “Turn Around,” “Am I Safe,” “Anybody Want to Take Me Home”

Rachel Hirsh (IWTDI): “Wolves,” “Gimme Something Good,” “Dancing With the Women at the Bar”

Major kudos once again to Dave Rose, proprietor of downtown Raleigh nightspot Deep South The Bar, for executing another stellar poster-design job for “Losering 2: A Tribute to the Songs of Ryan Adams” — happening at Deep South on April 11 as a sequel to the first “Losering” tribute show that happened back in May 2013. I’ll be your host for the evening, introducing the acts as they delve into the Ryan Adams/Whiskeytown songbook. As to who will be performing, the lineup goes like this:

No word yet on repertoire, who will play what — but it did not take long for a “Summer of ’69” joke to pop up on the event’s Facebook page:

So the second “Losering” tribute show is coming up, happening April 11 at Deep South The Bar in downtown Raleigh. And as if you needed another excuse to go, it’s going to be a benefit for the Food Bank of Eastern North Carolina. No, we’re not expecting Ryan himself to show up, but it will be a very fine lineup and most likely another sellout. So don’t sleep on getting tickets.

I’m also happy to report that this is not the only Ryan Adams/Whiskeytown tribute show in the works at Deep South. Coming later this summer will be an event paying homage to the definitive Whiskeytown album, Strangers Almanac. The date for this show is not yet settled, but it will probably happen somewhere around the anniversary of the album’s original release date (which was July 29, 1997). Stay tuned.

While I’m at it, there’s also a tribute show inspired by my man Eddie Huffman’s John Prine biography, “In Spite of Himself,” which will be in stores March 15. “A Tribute to John Prine” happens May 17 at Doodad Farm in Greensboro with performers including Chip Robinson, John Howie, Michael Rank, Caleb Caudle, Jon Shain, Danny Gotham and tons more. This, too, 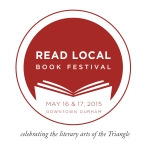 is a benefit – for Voices Together, a super-cool non-profit in Durham that serves children and adults with disabilities.

I’m not sure I’ll make it to the May 17 Prine tribute show because I’ll be on a music-writing panel at the Read Local Book Festival in Durham that same day. But I hope to be at one of Eddie’s bookstore readings, mostly likely Durham’s Regulator on March 25. He’ll also be at Scuppernong in Greensboro on April 10. Check his book blog for particulars on that. 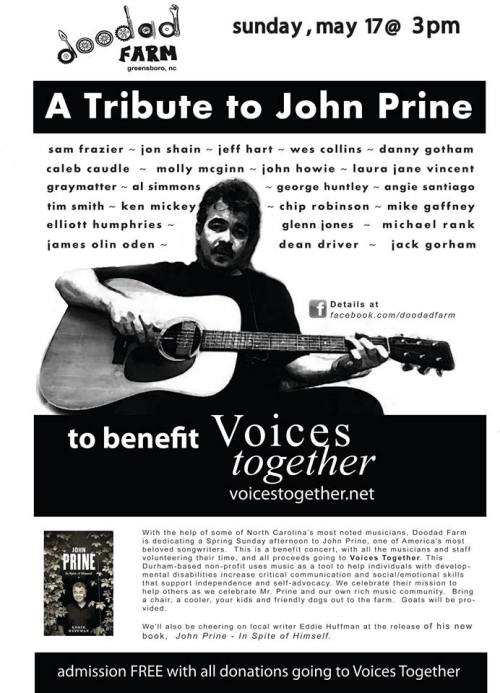 So yesterday, a friend of mind forwarded me the following alert from the online concert-tracker Songkick:

Ryan doing a show anywhere in Raleigh would be enormous news, given that he’s not played his former hometown in close to a decade. But I fear I must burst that bubble, because it seems that Songkick assumed Ryan himself will be the bill for our April 11 tribute show, “Losering 2: The Songs of Ryan Adams.” As Deep South’s John Booker chided in a Facebook posting: 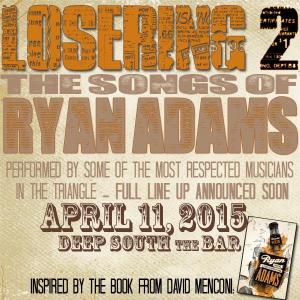 You’re going to give some nice Raleighites heart attacks. Get better at the internet, please. And to anyone that saw our event listing or [this] graphic and actually thought that to mean Ryan is coming to town (and playing our 100 cap room), bless your heart.  😉

John sent Songkick the requisite correction-request email on Saturday afternoon. Twenty-four hours later, however, Songkick’s erroneous listing is still up. I guess those folks must not work weekends. (NOTE: It finally got changed Monday afternoon.)

Anyway, I’d like to note for the record that Ryan would be more than welcome to attend. But let’s not go spreading rumors that aren’t going to pan out. Even if Ryan weren’t on a self-imposed Raleigh hiatus, he’s scheduled to be 2,500 miles away that weekend playing the Coachella Festival in California.

Mark your calendar: April 11 for round two of “Losering: The Tribute”

I am delighted to announce that there’s a date for another Ryan Adams/Whiskeytown “Losering” tribute show at Deep South The Bar in downtown Raleigh. Scheduled for April 11, this will be a sequel to the first “Losering” show from back in May 2013 — which was a fantastic time.

Lineup and repertoire details are still to come, so please do keep watching this space and you’ll be the first to know just as soon as that’s all sorted out. Wherever you are, I hope you can find a way to join us. And while you’re there, look for this piece of graffiti by yours truly, which is on the wall right by the stage at Deep South.