Posts Tagged With: Singing As We Rise 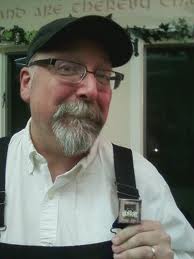 When I did the big Raleigh reading for “Losering” last month, one of the evening’s few disappointments was that Joe Newberry was unable to attend. But he definitely had an excused absence. For you see, Joe was at Ryman Auditorium in Nashville that same night, where he was up for a “Hillbilly Grammy” (well, an International Bluegrass Music Association award, if you want to get technical about it). And darned if he didn’t win best gospel song, for “Singing As We Rise” as performed by the Gibson Brothers and Ricky Skaggs. Every now and then, good things happen to people who are so deserving that it warms your heart, and this was just such an occasion.

Joe is one of the most stellar humans I’ve ever known, and modest to a fault. I’ve been trying to talk him into letting me do one of the N&O’s weekly “Tar Heel of the Week” features on him for years, and he has always demurred. But after his well-deserved IBMA triumph, he finally relented. You can see the story here.