When I go to a convention, I’m usually there to cover it — typically for the News & Observer but occasionally for someone else. Coming to Nashville for this week’s Americana Music Association Festival & Conference has been different because I’m here in a marketing capacity to launch “Losering.” As part of the N&O’s financial struggles, the paper’s employees have to take unpaid furlough weeks this quarter. I chose mine to coincide with AMA so I could focus on book matters. That’s been good, but it also feels weird not to be filing AMA dispatches for my work blog. 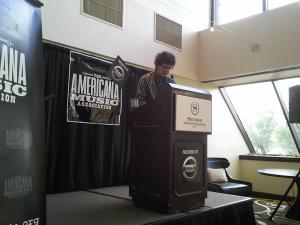 So I did my first reading the other day, on the mezzanine of the AMA conference hotel, and it went well. About 15 people came, paid attention and asked questions; and we sold into double figures on books (thanks to Nashville’s Parnassus Books). Some of the people who came, I didn’t even know. Every writer has war stories about readings they’ve done where the only attendees were friends or relatives; and as glad as you are to see them, it’s even better when strangers come because then you feel like you’re making progress. Still, we’re grateful when anybody at all shows up.

I guess you could say I’m here on behalf of UT Press, too. My American Music Series colleague Don McLeese did a reading for his Dwight Yoakam book (at the Country Music Hall of Fame, no less). So I put on my co-editor’s hat and introduced him, talking a bit about the series. I’ve connected with a few other scribes at the conference, and we’ve had some really good discussions about potential future titles. Here’s hoping they continue on-course.

Another writer who did a reading at AMA was Sylvie Simmons, whose “I’m Your Man: The Life of Leonard Cohen” is just out and earning raves in all the right places. Of course I’m green with envy — this is the kind of New York Times acclaim every author dreams about, and her book is also in amazon’s top-100 — but not resentful. Simmons is much-beloved in the rock-write world, and she has definitely earned the acclaim. What I’ve read so far of  “I’m Your Man” is great, and Simmons went through quite an odyssey getting the book done. At her reading, she broke out a ukulele to do a lovely rendition of Cohen’s “Famous Blue Raincoat,” a very charming touch that made me feel awkward about the stammery reading I’d done the day before. But we endeavor to persevere.

I was proud I could give Simmons a copy of “Losering,” and she was kind enough to accept it with enthusiasm. A cool thing about participating in something like AMA is seeing your name in the event program alongside people you admire, musicians as well as other writers; it’s probably the equivalent of getting the late-season call up to the big leagues for the proverbial cup of coffee, but a thrill nevertheless. And after Simmons’ reading, as folks were standing around in clusters making plans for Friday evening’s shows, two people who hadn’t been at my reading came up to me with copies of “Losering” they wanted signed.

That was pretty danged cool. And so was this, the first local review to turn up in the Triangle. On we go…