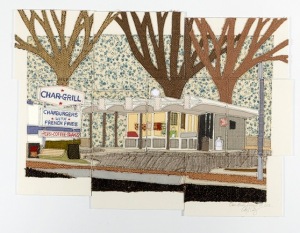 As covered in “Losering” as well as (repeatedly!) on this blog, Ryan Adams has chosen to stay away from his former hometown of Raleigh for a very, very long time. As of this month, June 2016, it’s been more than 11 years since the last time he played a concert anywhere in North Carolina.

But Ryan’s old Whiskeytown bandmate Caitlin Cary remains a very visible part of the local music, arts and activist community here. You could even describe Caitlin’s recent artistic efforts as an ongoing love letter to Raleigh. Using a technique she’s dubbed “Needle Print,” Caitlin makes “Freehand Sewn Collage” depictions of famous as well as obscure structures in the city — from some of Raleigh’s most iconic buildings down to dwellings known only to the people who live there.

Caitlin has been doing these works for a couple of years, rendering local scenes in the highly unusual medium of discarded upholstery fabric. And by now, she’s built up enough of a body of work to rate a feature in the Sunday paper. So that’s what I did. You can see the story here — with fantastic pictures from the always-reliable Juli Leonard, an N&O co-worker of mine who also put in fine work on last year’s Connells video update — and check samples of Caitlin’s work here.

ADDENDUM (6/25/16): Another feature on Caitlin, this one in Nashville Interiors. 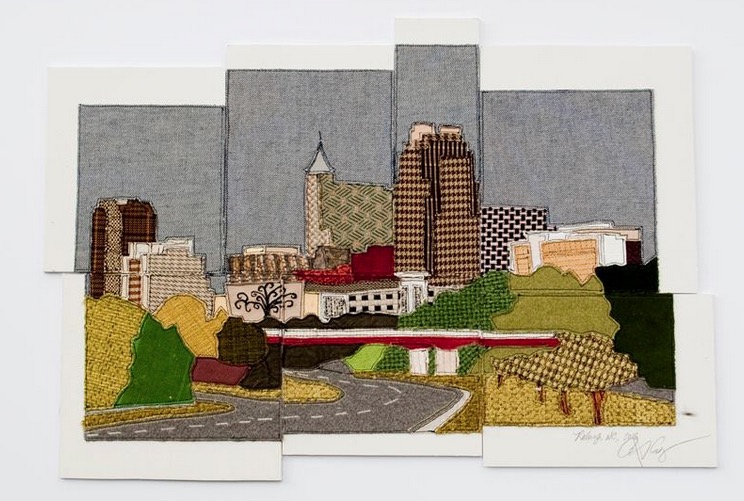 One thought on “Caitlin Cary needle prints the Raleigh Skyline”