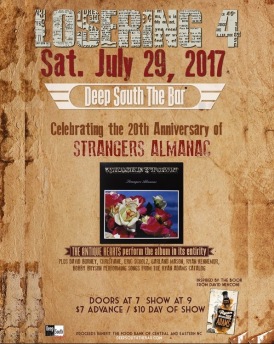 Next month will make (gulp) 20 long years since Whiskeytown released its 1997 alternative-country landmark Strangers Almanac, and we’ll be marking the anniversary in style with another “Losering”-themed tribute show. Scheduled for July 29 — which was indeed the  release date for Strangers back in 1997 — “Losering 4” will feature Antique Hearts in a reprise of last year’s “Losering 3” show, when they played Strangers from start to finish with stunning precision.

Also on the bill will be David Burney, Christiane, Eric Scholz, Garland Mason, Bobby Bryson and Ryan Kennemur, all playing other songs from Ryan’s catalog over the years. If I may be so bold as to make a request, I’m hoping for a song or two from this year’s Prisoner.

I’ll be there to serve as host, of course, and the proceeds will benefit the Food Bank of Central and Eastern NC. So pencil in July 29 for Deep South the Bar, and get tickets here.

One thought on “Twenty years after: “Losering 4””